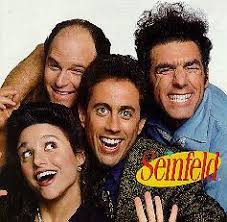 During its long run on TV the “Seinfeld” show had a hilariously entertaining take on urban life, baseball included. With George working for the New York Yankees and the occasional Keith Hernandez appearance, “Seinfeld” embraced the game in its own zany way.

I was reminded that last night while watching a rerun of Episode 37 – The Letter, in which Kramer and Elaine go to a Yankees game with owners’ box tickets given to them by Jerry’s girlfriend of the hour, the daughter of the Yanks’ accountant.

Elaine, whose character hails from Baltimore (well, Towson, Md., actually), wears an Orioles cap to the game. The accountant comes by to say hello and suggests and then insists that Elaine remove the cap. She refuses and gets tossed from the game.

The incident sets up a similar situation involving Elaine’s boss that closes the episode.

I have scoured the Internet without being able to find a still from the show with Elaine in her Orioles cap, so I post  in tribute the generic cast shot above.