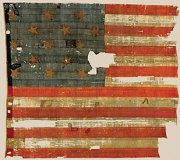 At baseball games we spectators join the players in removing our caps for the singing of our national anthem, a notoriously difficult challenge that has produced some excruciatingly horrid renditions over the years. The most recent came a few nights ago by Victoria Zarlenga before the Scotland-USA soccer match (listen, if you dare!).

Last night in Cleveland, however, the singer got it right. Thanks to Facebook, I was tipped off to a couple of video recordings (here’s one) of the performance by Dante Citraro.

Dante, whose rich baritone matches his operatic name, grew up on the same block in Cleveland Heights as I did. I had no idea that the kid who was one of the best buddies of my youngest brother would someday stand near home plate at  Progressive Field and deliver an outstanding performance of the Star-Spangled Banner before an Indians game.

He sang the song as composer Francis Scott Key intended: Straightforwardly, at a firm and dignified pace. He did it with now show-off trills or other vocal gymnastics that every wanna-be Mariah Carey or Beyonce tries out at so many sporting events across this great land.

A tip of the cap to you, my friend Dante. Well sung. Well done.

University media executive by day, blogger by night, I am a well-traveled resident of New Jersey View all posts by ballcaps