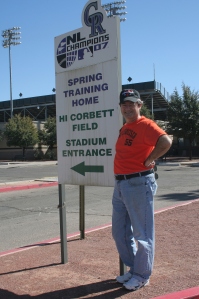 A family matter brought my wife and me to Tucson for a few days, the closest I’ve ever gotten to Spring Training in Arizona. While time did not permit us to travel north to the Phoenix area where the major league teams are training, I was able to stop by briefly at Hi Corbett Field in Tucson, where the Cleveland Indians trained many years during my youth.

In this photo taken outside the park Tuesday, I’m wearing my San Francisco Giants 2010 world champions cap and a Tim Lincecum T-shirt. I’d put them on not knowing I’d be at the park, but it worked out well for the photo – a little dig at the Giants’ National League West rivals, the Colorado Rockies. They trained in Tucson until moving to new Phoenix facilities this spring.

Later in the day, we took a drive west of town into Saguaro National Park and Tucson Mountain Park. It was in the latter that I had a close encounter with some “jumping” cholla cactus pods that attached themselves to my jeans. I used my iPhone to brush the first one off but the cactus dug its hooks into the index finger of my left hand. Others stuck into my left leg. I’ll spare you the details of removing them, but tweezers were involved.