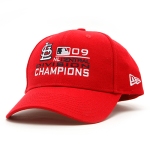 That didn’t take long. The Los Angeles Dodgers made short work of the Cardinals in the National League Division Series, closing out the sweep this evening 5-1 in St. Louis. The Cardinals and their fans are thus stuck with this National League Central cap to mark their achievements this season.

My fingers want to type “There’s no shame in going to the playoffs and getting swept in the opening round.” But that’s not what I believe.

Getting swept is a humiliating experience in baseball — and there a many equivalents to it in real life. In the NFL, it stings to lose in the first round of the playoffs but not as badly as it does in Major League Baseball. Three and out — ouch.

It hurts even worse if you had one of the games seemingly within reach, only to bobble it as badly as the Cardinals did in the ninth inning of the second game.

If the Cardinals had squeaked into the playoffs as a wild-card team, it might not hurt so bad. But they cruised to their division title. They and their fans expected much more.

It will be a long, cold winter in St. Louis.