Having been born with virtually no talent for basketball, I suppose it’s not a huge surprise that basketball ranks fairly low on my list of favorites. As far as I can recall, I’ve only had one NBA team cap my entire life. That was a nifty green and black Seattle Supersonics cap, but it went by the wayside a few years ago either in a move or in spouse-ordered closet cleaning.

Now, the Sonics are — incredibly — gone from Seattle, having been transformed into the Oklahom 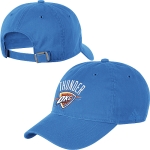 a City Thunder.  This is one hat I won’t be wearing.

Without a pro team in Cleveland, I grew up a New York Knicks fan by virtue of network television. When the expansion Cleveland Cavaliers arrived, I followed them intently. That led to year-round frustration. Once the Indians wrapped up another poor season, the Cavs would step in and continue the misery through fall and winter.

Maybe that’s why I’ve managed to see relatively few NBA games live. I must have seen the Cavs play at the old Cleveland Arena, but I can’t swear to it. I saw the fourth quarter of a Milwaukee Bucks game courtside at MECCA in the early 80s. The next one I saw was a Sonics’ game at the Seattle Center arena, fabled as being the site of the only rainout in NBA history.

In all the years I lived in the Bay Area, I never once saw the Golden State Warriors play live. In our New York-New Jersey years, I saw Jason Kidd and the Nets a number of times, including a playoff game or two, thanks to a friend who had great access to tickets.

Back in California, I got to see the Sacramento Kings play the Cavs from a corporate box at Arco Arena. I may as well have been at home watching TV.

I’ve paid almost no attention to the current NBA season. I guess that’s because I keep wishing Willis Reed, “Clyde” Frazier and Earl the Pearl were still out there at Madison Square Garden.

One thought on “Seattle without the Sonics, and other sad tales of the NBA”